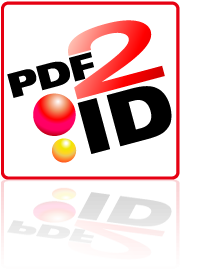 "PDF2ID and ID2Office help save our Creative Cloud customers countless hours and allows them to focus on what really matters, their creative work. They help automate workflows and enable collaboration by making conversions between PDF, InDesign and Office seamless"

How does PDF2ID convert a PDF to InDesign type?

PDF2ID extracts text to form lines, then groups the lines to make paragraphs; applies text fonts and styles such as bold and underline where possible; regroups independent graphic elements; and creates tables. Furthermore, it performs contextual analytics so that related data are correlated and remain together.

PDF2ID has been designed to provide editing flexibility rather than a pure and 100% reconstruction of a PDF file to the InDesign format.

PDF2ID doesn’t make InDesign a PDF file-editing tool. PDF2ID doesn’t provide round-tripping of a PDF file to an editable InDesign file type. Rather, the primary scope and objective of PDF2ID is to provide a seamless and transparent mechanism for PDF data recovery and reuse within InDesign. To achieve this, PDF2ID does its best to preserve the layout while reconstructing data along with the respective property and elements wherever possible.