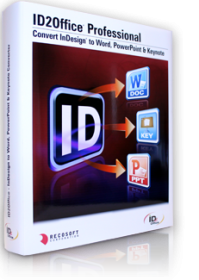 
"PDF2ID and ID2Office help save our Creative Cloud customers countless hours and allows them to focus on what really matters, their creative work. They help automate workflows and enable collaboration by making conversions between PDF, InDesign and Office seamless"

ID2Office is an Adobe® InDesign to Microsoft Office and Apple Keynote conversion solution.

ID2Office allows Designers and Creative Professionals to share InDesign documents with their customers and colleagues who require the InDesign file as Word, PowerPoint or Keynote with 1-click of the mouse.

ID2Office allows you to reuse the assets in InDesign as standard Word, PowerPoint and Keynote files enhancing workflow automation.

To Export an InDesign file to Word or PowerPoint you simply:

1. Download and install ID2Office 2022 and choose ID2Office – Export to Office.
2. Set the type to Microsoft Word or Microsoft PowerPoint and click Export and Save the file.

You now have a Word or PowerPoint file created from InDesign.

You can easily convert InDesign files without having to recreate the contents in Word, PowerPoint or Keynote.

ID2Office converts and exports InDesign (.indd) files to .docx, .pptx and .key formats. During the export process all of the text, fonts, paragraph structure, frames linking information, tables, graphics and other InDesign elements are converted and exported to the corresponding Word, PowerPoint and Keynote type. Every InDesign page is exported to an equivalent page in the resulting Word, PowerPoint or Keynote file.

ID2Office inspects the layout and details of the InDesign document during the conversion process; maintaining the layout in the resulting Word, PowerPoint or Keynote file. ID2Office has been engineered from the ground-up to provide seamless integration with Adobe InDesign eliminating the necessity to acquire and install additional tools; resulting in enhanced workflow automation.

More ID2Office videos – How to Convert InDesign to Word, PowerPoint and Keynote

How to Convert InDesign to PowerPoint, Word and Apple Keynote

Adobe and InDesign are either registered trademarks or trademarks of Adobe Systems Incorporated in the United States and other countries.