This video demonstrates how you can open and convert multiple PDF or Illustrator files to an editable InDesign document using PDF2ID v4.6 from Recosoft. PDF2ID is an Adobe InDesign plug-in that converts PDF to InDesign (indd) format. You can also convert Illustrator (.ai) or Windows XPS files using PDF2ID and it will ensure that the resulting InDesign (indd) document is editable. PDF2ID v4.6 operates with InDesign CC, CC 2014, CC 2015, CC 2017 on both Mac and Windows.
May 26, 2017
Youtube link : https://www.youtube.com/watch?v=8GyetrnOyuw

Thank you for joining us. Today, we want to demonstrate our PDF to InDesign conversion plug-in PDF2ID for Adobe InDesign CC 2017.

PDF2ID is an amazing tool to convert PDF to InDesign (INDD) type.

It allows anyone to easily convert material stored in a PDF to InDesign automatically. It also allows you to migrate data from Corel Draw, Illustrator and every other software to InDesign if you simply PDF the original data. Finally it allows you to recover lost or corrupt InDesign files if you have a PDF of the original InDesign document.

So here we have PDF2ID v4.6 installed against the newest edition of InDesign CC 2017. I’m performing this on a Mac but don’t worry Windows users everything works on Windows also!

A window appears which allows us to select a PDF, Illustrator or XPS file to convert. So lets just select all of these at once and Click OK to convert them

You see that the main PDF2ID – Options window appearing. We can control the conversion in detail but the default settings generally works; so lets click OK to convert the selected files at once.

Watch how PDF2ID v4.6 batch converts several PDF and Illustrator files to INDD type in a short time. Well the conversion is over so lets check the converted documents in InDesign CC 2017.

Looking at the results and you realize how well the layout has been completely re-constructed and the data well preserved; and all of text is live and editable. Notice the detail with which PDF2ID re-created InDesign elements. 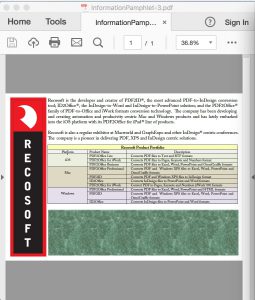 The original PDF file before conversion to InDesign CC

When PDF2ID converts a PDF file or Illustrator file or XPS file it ensures that all of your images assets are packaged together. So for every converted file a separate folder was created with all of the assets contained in sub-folders and linked back in. Cool! 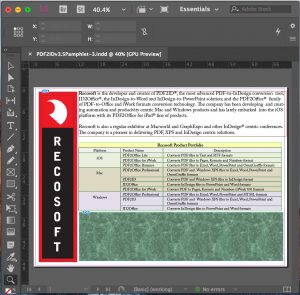 In a Nutshell to convert a PDF to Adobe InDesign CC using PDF2ID do the following:

PDF2ID has been engineered and developed by Recosoft. For more information visit us at www.recosoft.com