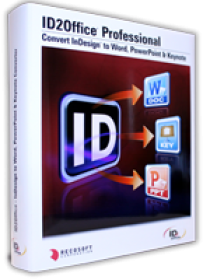 "PDF2ID and ID2Office help save our Creative Cloud customers countless hours and allows them to focus on what really matters, their creative work. They help automate workflows and enable collaboration by making conversions between PDF, InDesign and Office seamless"

ID2Office analyzes the structure of the InDesign document extracting text, capturing tables, identifying paragraphs and the respective properties, graphics, other object and property information when converting an InDesign file to the Word, PowerPoint or Keynote formats.

ID2Office tries to maintain the layout and looks of the InDesign file as much as possible to the target Office or Keynote formats; but some data due to the inherent differences between InDesign and the Office/Keynote products may differ in the resulting file.

ID2Office has been designed to provide editing flexibility rather than a pure and 100% reconstruction of a InDesign file to the Word, PowerPoint or Keynote format.